Poker is a card game in which players place their bets based on the value of their cards. The poker deck consists of 52 cards. Two to seven players can play at a table, always individually.

Currently, there are different types of poker, each with its own set of rules, although the best known and most common is Texas Hold ’em.

In the below guide, we will be explaining some basic rules for poker and how to deal poker cards. Moreover, we will present all poker hands and their values. Let’s get started!

Best US Casinos with Online Poker

The main objective of poker is to have the best combination of cards to win the total sum of the bets made or, at least, get the other players to withdraw (fold) from the game. Winning the pot by getting all the players out of the game shows that the one with the best hand does not always win.

One of the first rules to learn is how to deal poker cards. The following apply specifically to Texas Hold ’em.

The game is played in a clockwise direction. After the first starting bets have been made, each player at the table is dealt two hole cards, after which five are revealed to everyone. The first three cards are the flop, the fourth is the turn, and the fifth is the river.

Poker hands are standard across most versions of the game. Although there are some exceptions, players can find, from strongest to weakest: 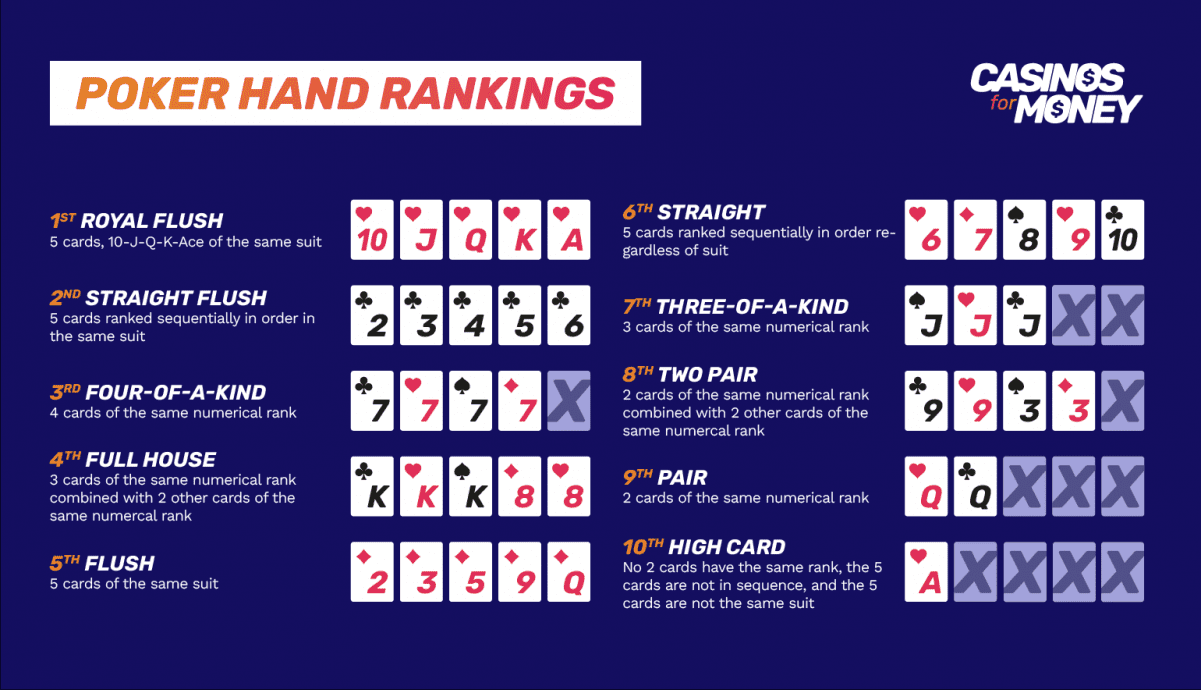 A Royal Flush is made up of the five highest consecutive cards of the same suit (A-K-Q-J-10). While it’s conceivable that there could be two royal flushes of different suits in the same hand, it has never happened.

A straight flush consists of five consecutive cards of the same suit, except A-10. Whoever has the highest straight wins. It’s possible, but unlikely, to have two straight flushes. In this case, the players split the pot.

Four of a kind

This means having four cards of the same value. The one with the highest four cards wins, and there can obviously be no tie.

A full house is the combination of three cards of the same value with two other cards equal to each other. Whoever has the highest three-of-a-kind wins. There can be no tie.

A flush means having five cards of the same suit, but not consecutive. The one with the highest card wins. If there is a tie, determine who wins by the next card, and so on. In the event that the cards of both players are of equal value, there is a tie, and the winnings are shared.

When the five cards are consecutive, without all of them being of the same suit. The ace can tie with the king or with the lowest card of the deck. The straight that starts with the highest card wins. The winnings are split if there’s a tie.

Three of a kind

Three cards of the same value make three of a kind, or “trips,” in Texas Hold ’em. If two players have trips, the higher value wins. It’s possible to have a tie in which the players split the pot.

Two matching cards and any three unlinked. The player with the higher value pair wins. In case of a tie, the one with the highest value cards among the three loose cards wins. There may be a final draw, dividing the winnings.

If none of the other hands are made in a game, the player with the highest card wins the hand. It’s possible to have a tie, in which case the players split the pot.

After dealing the cards, each player will examine them to study the possibilities of their hand. In turn, starting with the designated player, they will state whether they wish to bet, raise or call.

Check out our other Poker guides